Ever have a concern about your legal bill? Have you ever questioned your lawyer about it? Here is some unspoken insight on how your lawyer may view you when you question a legal bill.

Does your lawyer even care about your goals or your budget? Or are you just a number, some quantum of dollars? Though lawyers are highly adept at keeping information confidential (including their own thoughts), a recent post to a public legal forum (AVVO) sheds some light on what might really be going on inside a lawyer’s head when they encounter a client concerned about a legal bill. In all, five attorneys responded–though one is not like the others (spoiler alert: that’s me).

The client’s question was about how much time the lawyer spent preparing for a hearing:

“I think my lawyer is being inefficient . . . she prepared for the hearing for 4 hours but the hearing was for an issue that we had previously prepared for and nothing had changed since then.”

Perhaps to her surprise, she received answers which–had they been offered in almost any other industry–would have precipitated a tidal wave of social media scorn. But in the legal world, they’re commonplace (even if unspoken), and clients have little warning about what they will actually pay their lawyer until after the bill arrives.

One attorney responded with such rebuke for the client’s plight that it borders on misconduct:

“you really aren’t in a position to make an informed decision about whether your attorney’s billing is reasonable.”

With an hourly billing regime a natural disconnect often develops between cost and outcome–especially when the lawyer cannot achieve the client’s goal. Clients may have a very difficult time evaluating legal problems, evaluating the probability of winning a particular case (or aspect of it), or evaluating what the representation should cost. Clients hire lawyers precisely because they don’t understand the first two, but it behooves attorneys to counsel clients on the last, and facilitate a dialogue on what benefits and value the client has obtained in the representation. 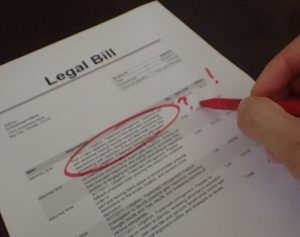 A bit of an historical aside: Attorneys have a hard time thinking in terms of value (demand side), because they instead think in terms of production (supply side): “How many hours did I bill?” “How much revenue did I generate?” Not: “How could I deliver the same (or, gasp, better) service at the same price?” “How could I accomplish that task more quickly?” That’s just not how most lawyers think because that’s how the legal industry has been for centuries and there has been little pressure to change.

Returning to the point, a second attorney to “counsel” the client on her legal bill dilemma again dug deep into the earth for some heavy mud-slinging:

“EVERY hourly rate client thinks EVERY charge by the lawyer is over priced, over billed, under serviced and the work undervalued.”

Well, isn’t that a rather sweeping generalization? Two lawyers also agreed with this individual’s “insightful” answer. If this sentiment is so widespread, no wonder the legal profession has such a PR problem.

Then, a third lawyer threatened that the client might herself face a lawsuit from her own attorney!

“you are setting yourself up for a breach of contract lawsuit.”

Again, and perhaps not surprisingly, four other attorneys agreed with that answer! Admittedly, this attorney did suggest the client speak with her lawyer, and even seek redress with the Florida Bar if necessary, though the attorney’s initial response was what many would instinctually consider both dissatisfying yet somehow expected from a lawyer. It shouldn’t be.

The fourth response, albeit short, also missed the mark by failing to counsel the client on how to solve her problem:

“If you don’t like the billing practices, fire your lawyer and hire another.”

Fine. That’s a perfectly acceptable half-solution going forward, but doesn’t address what to do about the current bill. This time, however, only two other attorneys agreed with that sentiment.

Despite all these inane, self-serving responses, client perception and satisfaction do matter, and it is astounding how many in the legal profession see fit to threaten and insult non-lawyers. So while you may not hear these kinds of responses from YOUR lawyer (because well, they’re still your lawyer, right?) you might wonder what risk you are taking by questioning a legal bill. Your lawyer might be more tactful and subversive than these AVVO commenters, but you may wonder what your lawyer really thinks when you approach them with a billing concern.

So, how did the last attorney chime in?

“You are the client (customer!) . . . Your attorney should be willing to have an open dialogue with you about what your budget is, and give you options that stay within it. No one likes getting hit with an unexpectedly high bill and then being told that they must simply pay “or else.” That’s just not good service.”

Full disclosure: That was my response to this poor client. What wouldn’t come to a surprise to anyone other than a lawyer was that my response was the only one voted as helpful (i.e. by the non-lawyer person asking the question). And even more sadly, only one other lawyer agreed with me.

Despite the multitude of answers given prior to mine, apparently I wasn’t allowed to have the last word, and Attorney No. 2 felt compelled to deride my client-centric counsel:

“While [Mr. Klema’s advice] SOUNDS like a wonderful, sensitive and imminently respectful manner of interaction with a lawyer and client, its simply a recipe for disaster.”

Yup, apparently clients are too dumb to know better, and if a lawyer takes a forward thinking (read: business oriented) approach to managing clients and their expectations, then legal disaster will ensue. He then makes an inapt analogy to the practice of medicine, asserting that patients are not in control of their medical care. Newsflash: they are. Only in emergency situations are some decisions beyond a patient’s control. While I did not publish a comment in response to this poorly misguided lawyer, the reality is that the client is, in most situations, in control of the representation, and any lawyer who confuses or threatens their clients into believing that there is only one way (their way) is simply a shyster. Buyer beware.

So, coming back to this particular client’s question about hearing preparation, there is vast range in how much time an attorney could prepare, believe me. So why not offer a client options? “I can do the barely any prep for $X (minimum ethical), I can spend N hours which will cost $Y (good), or we can go all the way up to a mock hearing for $Z (excessive). You choose.” Now that’s client empowerment.

In future posts, I will continue to explore attorney billing practices, pricing, and what things clients should look for when evaluating a lawyer to determine if that attorney is efficient with their time (and thus the client’s money). I will also be reviewing the Second Edition of Richard Susskind’s book, Tomorrow’s Lawyers, where he surveys how the above kind of lawyer thinking has become predominant and how the legal market is changing in response to client demands and technology advancement. Stay tuned…