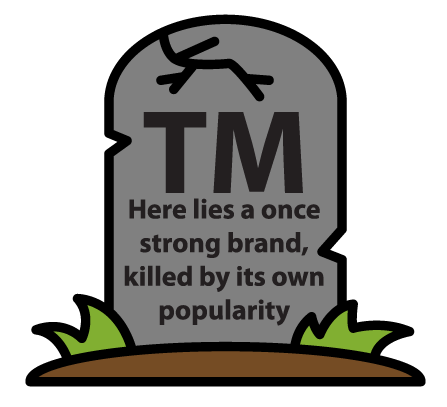 What happens when a brand becomes so well known that people start referring to all products according to the brand name? For example, what is the first term that comes to mind when you think of a box full of facial tissue? Kleenex perhaps? (Technically, this brand remains alive, though there is likely a good argument for invalidation on the basis of genericide.)

Another well known brand that became a generic term is escalator (formerly a brand owned by Otis Elevator Company). The USPTO even has a page dedicated to trademarks which have died due to genericide). Most people would probably love to be so successful with a brand that it becomes known by virtually all people. Generally by that point, a company would likely have made significant profits on the brand name before it became so wildly popular that it lost its connection to the original product. But what if you want to keep your market dominance?

How to Avoid Genericide

So how does one prevent their brand from becoming so well known that it encompasses all products rather than the original company’s? In truth, it is difficult. That is because one would have to change the minds of millions of people to ensure that consumers associate the product with the logo, slogan, or word, and not any product with the trademark brand. The most straightforward way is through ongoing marketing.

Maintaining the distinction between your brand and other products (perhaps inferior products) in the public mind is the best way to ensure that your product keeps its elite status as a source identifier of your goods, and not the goods of your competitors. Another way might be found in the Google case, where an individual filed a lawsuit to invalidate the trademark “GOOGLE” for web searches.

Presently, a lawsuit is pending before the U.S. Supreme Court in an effort to make the term “google” generic of any web search. The lower court rulings found that the trademark “GOOGLE” was not generic because, in part, Google (the company) has other assets associated with that name, and not just its search engine. Depending on if the Supreme Court weighs in on the case, this could be another option to defend your brand against attack: Associate it with multiple products. This strategy, however, likely only works with a company brand name, and not a specific product name.